So, about a year or so ago I had in mind a post where I would collect all the homages to the Death of Supergirl cover I could find.  This post has been sat in my draft page since December 2009.  I thought I'd do something about it and actually post the damn thing.

For clarity, here is the original image, from the Crisis on Infinite Earths maxi series, issue #7: 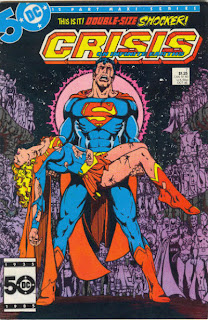 NOTE: As people leave comments I will update this post to contain the correct information.
And here's a nice double page spread of the Crisis, by Alex Ross, also showing an alternate universe death of Wonder Woman: 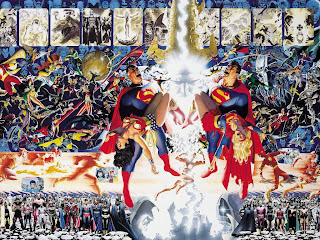 For clarity, I am only interested in images that clearly homage the pose and composition of the original image.  It is quite clearly an important (and famous) image both in terms of the history of DC comics, the role of Kara in the Crisis on Infinite Earths maxi series, and to Supergirl fans.  However, I cannot promise much deconstruction of the homage images.  This is purely a fannish collectability thing.

Please let me know what images I have missed!

Lets start with an image from the Peter David Supergirl series, issue #79: 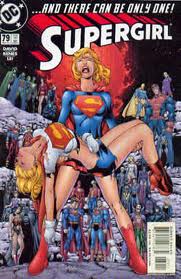 That's the original Supergirl (the one who died in Crisis but from a parallel dimension) holding the Linda Danvers Supergirl in her arms.  This was a great arc by the way, and you can buy it in trade format.

Superman: The Man of Steel #10 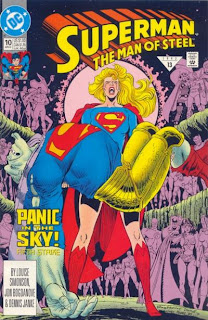 That's Matrix Supergirl (later to be Linda Danvers Supergirl) holding an alien named Draaga.  One time Superman foe, Superman inspired him to become good.  I believe this was one of the first homages.

From Adventure Comics #5, during the Blackest Night storyline: 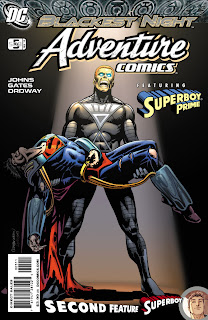 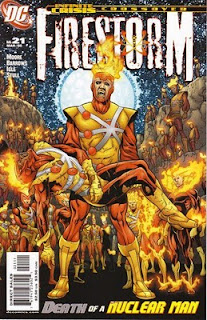 I'm really not that familiar with Firestorm, so I have no idea of the background to this story.  Anyone care to enlighten me? 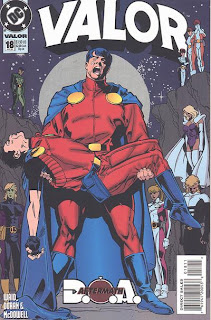 This looks like a Legion of Superheroes thing.  Valor is very similar to another character named Mon-El (recently SuperMon), created when history was re-written so that Mon could never have met Jor-El or a young Clark.  Valor took his place and became a distinct character (so I believe). 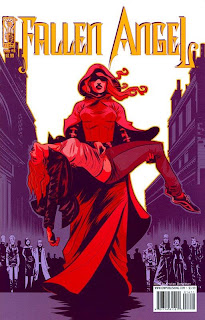 The Fallen Angel was widely regarded as being Linda Danvers, after her Supergirl series had ended with the events of the Many Happy Returns trade.  This cover is interesting as although it has the crowds and the pose down right, the Fallen Angel's expression is very different to all others we have seen.  She doesn't look anguished, she looks pissed off.  Almost like she isn't surprised by the dead body. 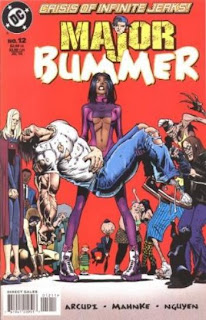 This is a DC book, on the humorous side, about a slacker who gains superpowers. 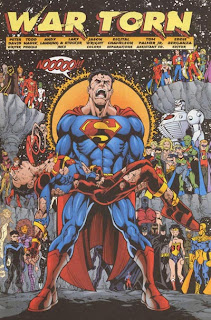 This is possibly an Our Worlds at War storyline.  That's Superman holding Robin's cloneboy(Superboy) in his arms.  This image was not the cover to the comic, but instead one of the first inside pages. 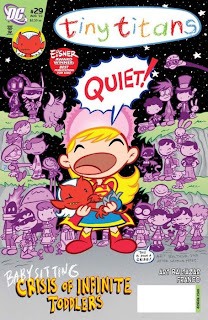 This is one of DC's children's books.  That's Kid Devil Supergirl is holding.  He isn't dead, he's sleeping.

An alternate cover to the original Crisis on Infinite Earths maxi series: 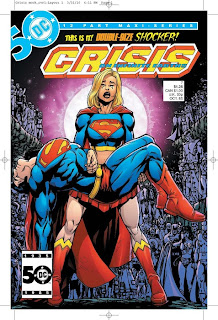 This cover popped up in American TV show, The Fringe, where the episode took place in an alternate universe.  Cool huh?

Here are some other tiny pictures:

These are both apparently from vu.morrisey-solo.com.  Unfortunately the only way I can access the images is through google image search as the actual website refuses to load.  Has anyone got any more information on these pictures?

Again, apologies for the tiny image. I can't find a bigger version.  Usually we view this image face on, here Superman is turned slightly to the right and Power Girl is held in opposite. Could this be a reference to her parallel universe origin?  Apparently not, as this comic came out years before Crisis on Infinite Earths, making it a precursor to, not a homage of.  Could anyone confirm the publishing date for this issue?

There must be actual Power Girl homages out there, does anyone know them?

As for other publishing companies efforts, well Marvel actually did the pose before DC did.  Here is Marvel's Uncannny X-Men #136, published in 1980, 5 years before Crisis on Infinite Earths (thanks korvarthefox for the heads up). 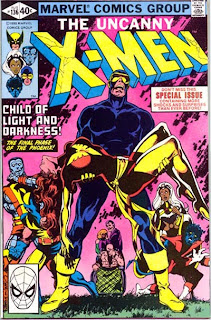 Marvel also came up with this Deadpool/Cable cover: 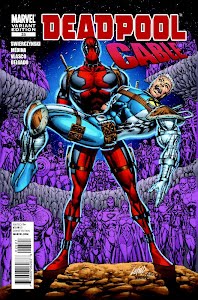 I'd say this is referencing DC more than Marvel, given the crowds in the background.

The story was titled "Mices On Infinite Earths.  Apologies for the small size, I can't find a bigger scan and if I enlarge it the picture quality deteriorates.

An animated JLU episode: Far From Home has a Green Lantern holding Supergirl homage (thanks Gear for the link): 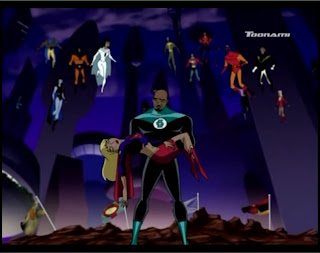 If anyone has any other examples of either cover art, individual panels, fan made art, interior pages or anything homaging the original Kara's death I'd love to see it.

Thanks to ActionFigureBlues and Supergirl Comic Box Commentary for helping me locate these images and offering advice on specific characters!
Posted by Saranga at 12:00 pm

I could go on about this forever.

The alien on MoS #10 was Draaga, a guy who battled Superman but then became good when Superman inspired him.

Valor is basically Mon-El. But when history was re-written such that Lar Gand could never have met Jor-El or a young Clark, his origin was jiggered and he was named Valor.

Major Bummer was a short fun comic about a slacker who is accidentally given great powers. Nice Doug Mahnke art and fun Srcudi scripts.

The Power Girl comic I think came years before COIE.

Thanks everybody! I have now updated the post with your input. It's much appreciated :)

I love these sort of things!^^

I did something similar a while ago for the JLI group shot: http://heroes-comix.blogspot.com/2011/04/bonus-features-jli-cover-and-bonus.html

Check out this page from my Annotated Infinite Crisis site where I've collected some more that you don't have (and will probably pinch the ones you have that I don't!)

Oh, and just found a bigger image of the Superman/Power Girl cover here but strangely, like the X-Men cover, it pre-dates Crisis...!

Hi, This cover from Superman's Girlfriend in 1972 also has the same pose.

I posted some of these homage covers on my blog :

Thanks for your post, I didn´t know the FALLEN ANGEL cover. I think I still have a few homage covers left that I will post one of these days.