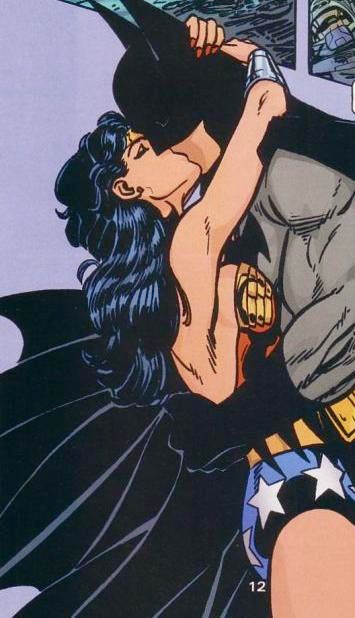 Bat/Wondy shipping is the best sort of shipping.

Anyone know where this is from?


Found this while hunting for everyday Wondy dresses. 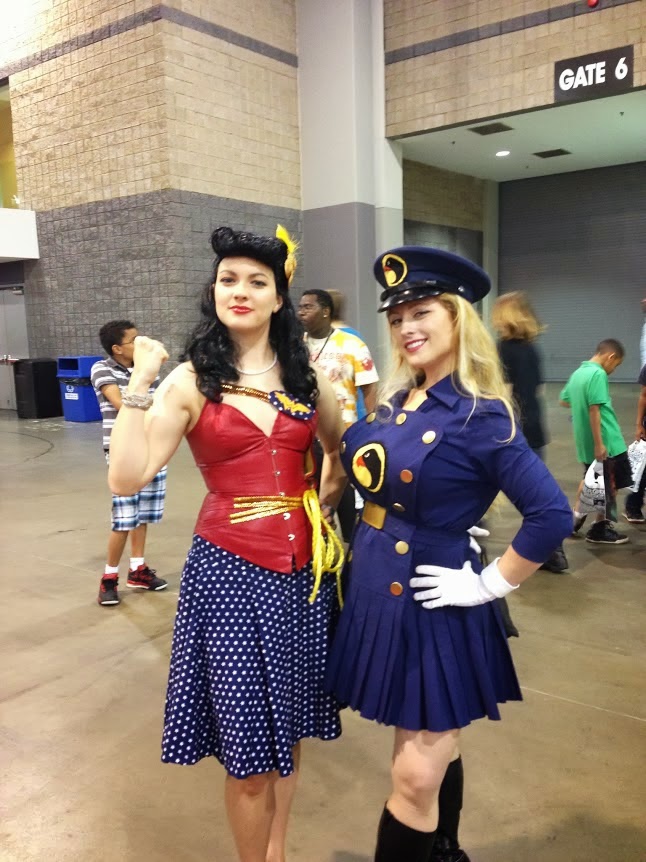 Something like for Wondy.  Has anyone seen anything like that?  Or can you think of any dress designs/patterns that would work, if I got the right material?  I guess I could just do a blue skirt/red top a la the lady in the picture, but I'd like something perhaps a bit more complicated than that.  I dunno.  Any ideas?
Posted by Saranga at 12:00 pm 5 comments:

So it turns out I have a dodgy knee.  I knew this because it occasionally gives ways on me when I'm walking, sometimes painlessly, sometimes with a great deal of pain.  Sometimes I even get the pain when it's doing it's expected thing of supporting the rest of my leg.  Lucky aren't I?

Anyway, because of this, both my physio and pilates instructor have given me a range of leg exercises and stretches to do.  I am doing them.  They help, a bit.  At least the pain comes less frequently when I do the exercises regularly.  Unfortunately it means that I cannot return to running.  The last time I tried a run - a very short one that was basic interval training - my knee then seized up and wouldn't bend for a week.  That hurt.  That hurt a hell of a lot.

I miss running.  I like the feeling of it, the way when you run you can't think about anything except how your breath feels and how your feet feel, and fall, and it's so bloody hard everything else gets shoved out of your head.  I don't get that from walking.  When I walk, even when I walk fast, it is usually a magnifier for my rage, and it is not a calming activity.

But, back to the point. Leg exercises and pilates.  Pilates is wonderful.  It's hard work, but it's making my torso muscles work in a way they haven't ever done before.  I can feel the difference between them now and when I started it 6 weeks ago.  I hope it will make me stronger and slimmer and I hope that it will kick start my dreams of getting a visible six pack (though I guess I'd better stop eating cake and lose at least another stone and a half before that becomes even the merest glimmer of a possibility).

Back to the point, again.  I haven't done any form of yoga in about a year.  I bought a yoga mat about 18 months ago, intending to use it outside in the summer, and failed to do so this year.  I now use it, rolled up, for one set of my leg exercises.  Having started doing this, I remembered how I used to do sun salutations and how I found them enjoyable.  So I looked up various guides for doing them and found this one: 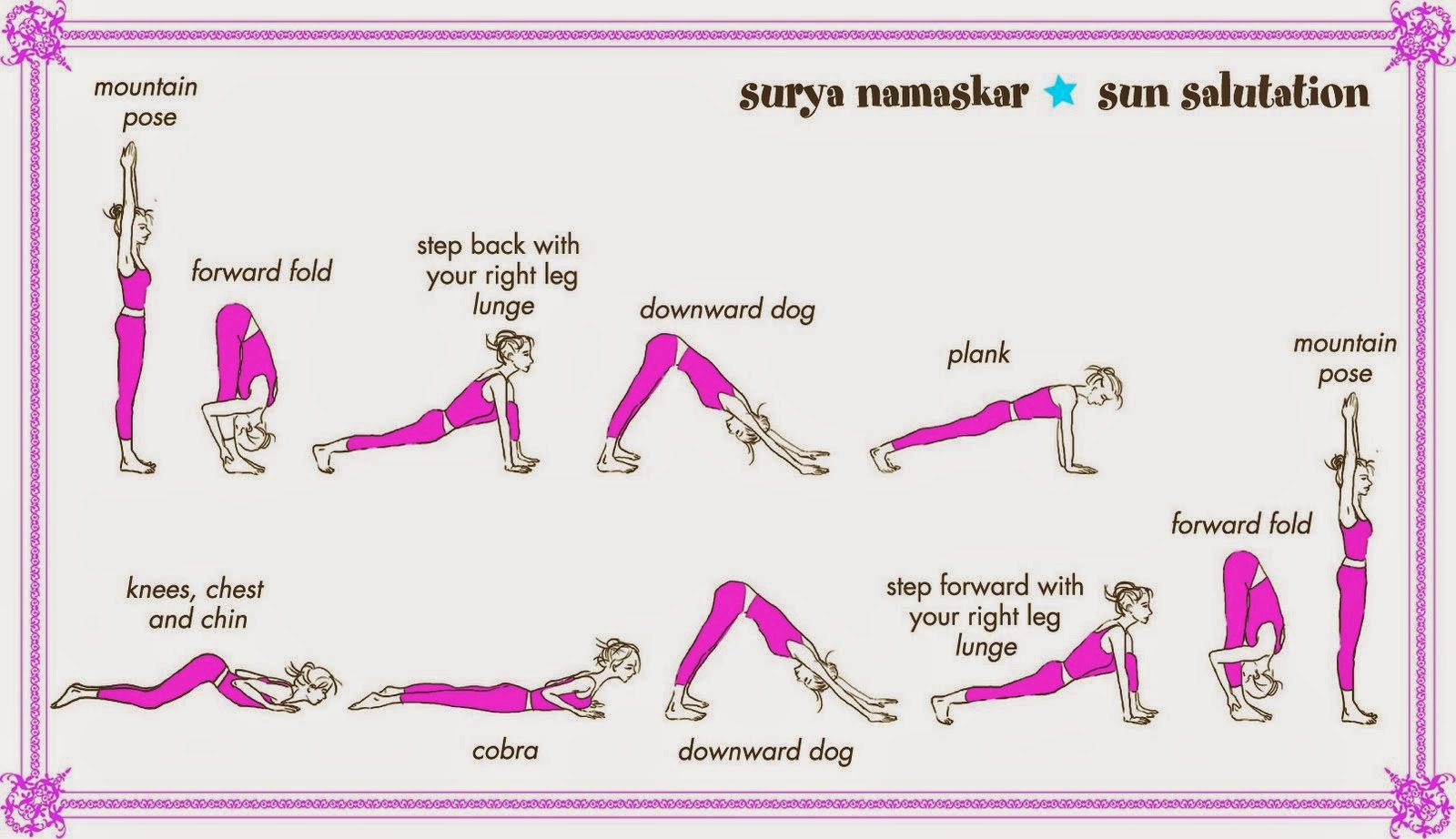 So I just tried it again and discovered a couple of things.
The mountain pose, the lunge and the cobra all feel pretty good for my back and legs.
The whole thing made me feel more open and relaxed.

I'm now going to add it in to my regular stretches/leg exercises.  I'm hoping to do 2 sun salutations a day.  If I set my goals too high I'll be put off and won't do them. But two full sets, so two lunges per leg, I can manage.

I also want to try meditating again, but I'm scared.. I know it will be good for me, it will clam me down, make me focused, but I'm scared of the silence in the meditation session.  I prefer to be busy and full of distractions.  We'll see what I manage.
Posted by Saranga at 12:00 pm 2 comments: 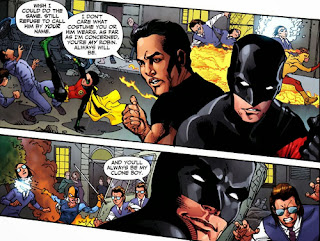 Perhaps this should be super slashy Saturday instead.
Can anyone tell me what issue this is from?

EDIT - Just found this (and others) in my draft posts folder.  Will be posting them over a period of a few weeks. They look to be about a year old.

I rescued one. They are huge.
Posted by Saranga at 12:00 pm No comments: 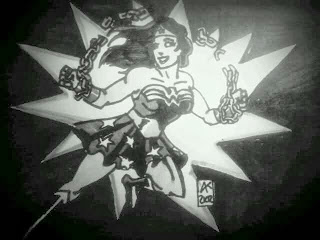 EDIT - Just found this (and others) in my draft posts folder.  Will be posting them over a few weeks. They look to be about a year old.
Posted by Saranga at 12:00 pm 1 comment: 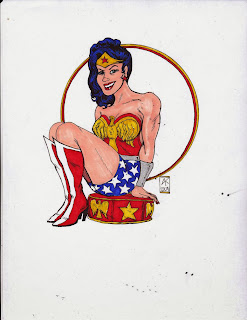 EDIT - Just found this (and others) in my draft posts folder.  Will be posting them over the next week or so.  They look to be about a year old.
Posted by Saranga at 12:00 pm No comments:


EDIT - Just found this (and others) in my draft posts folder.  Will be posting them over a few weeks. They look to be about a year old.
Lately I have been delving into Marvel. I've spent the last 6-8 years catching up on 70 years of DC history, now I think I'm going to attempt the same with Marvel.  Maybe.  Well, I'll try a few things out anyway ;)

So, New Avengers was a bit of mix.  It started off a bit weak - even the issues with Echo in weren't that great (probably because she wasn't in much of it).  Then Secret Invasion happened, which I loved, then Dark Reign, which was fun, then Seige, which was dire.  But along the way I found a variety of fun images I'd like to share with you.
I refer you to the centre panel. 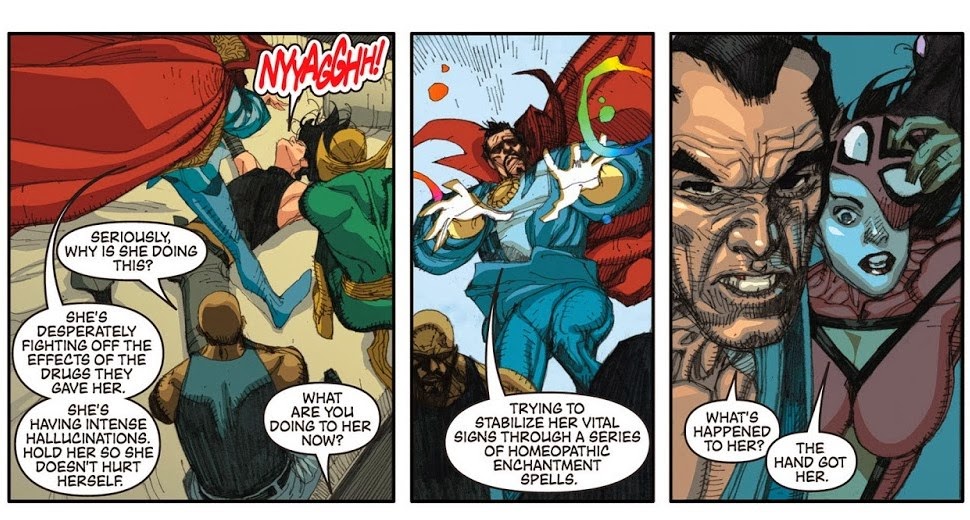 What exactly is homepathic magic?  Is it mostly mundane stuff with 0.0000006% magic feeling in it?

EDIT - Just found this (and others) in my draft posts folder.  Will be posting them over the next week or so.  They look to be about a year old.

I love this series.  I've been reading it digitally, which is why it's numbered to 61 in the title.  It's also released in print and I believe is now up to number 16, Olympus.

The way Smallville mines DC's rich history and folds it into the Smallville style is just perfect.  These issues cover the Valkyrie, Argo, Hollow and Olympus storylines.

Valkyrie I don't much care for, because it focuses on Lana and I never warmed to her.  Argo on the other hand, was a great version of the World of New Krypton (WONK) story from main DCU continuity.  Smallville really does excel at this sort of thing.

Then there's Argo.  Supergirl, the Legion and Booster were all involved in this story.  Booster was desperately trying to prove his worth as a hero.  The Legion's Smallville style costumes were gorgeous.  There is a page where the Legion are recalled from all space and time, and when they gather ready for battle, well, I got chills.

Darn it I'm a Legion fan. 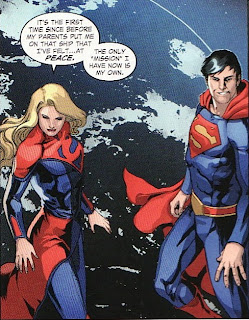 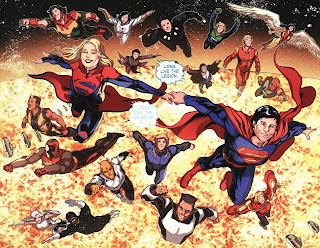 It's sleek, it's practical and it feels like a uniform.  I love Smallville's costumes.  LOVE them.

Talking of the art, Cat Stagg's covers are gorgeous and she draws the actors so well, this one is so obviously Laura van der Voort: 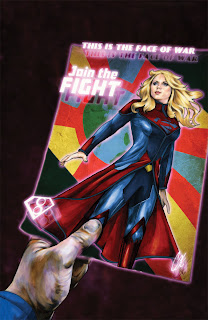 Kara had some great moments.  In Smallville she's always felt like her own person - not a junior rip off of Superman.  She's older than him, more mature and knows more about herself.  Or at least in the TV show she did.  Now Clark has matured they are more like equals.

Hollow focuses on Tess and her relationship with Lex.  It's a good traditional Smallville story of revenge and obsession.  We see how Tess views the world, from her new digital existence, we understand more of Lex, and Black Canary and Mia make a guest appearance. Beni Lobel does the art in this issue:

Then we get Olympus with the arrival of Wonder Woman!  Jorge Jiminez does art. It's beautiful.  We start with a flashback to 20 years ago where Steve Trevor (as a kid) has been washed up on Paradise Island. 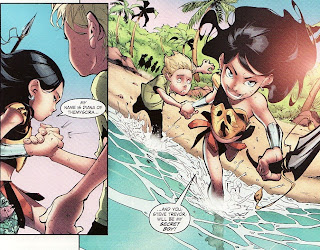 How cute it that??!!  Steve and Diana have childhood crushes on each other, and when they meet again in adulthood, once Diana has got to America, they still like each other.  Diana as adult is what I want and understand from a Wonder Woman.  Her language and phrasing marks her out as someone who grew up somewhere else.  The Amazon cultural mores are shown through the way she speaks.  She's bold and heroic. She's noble and intelligent.  She's a warrior.  She comes across Steve in the shower and she's a bit embarrassed at her reaction to him.  It's just perfect you know?  I can now ship Steve and Diana.

Also, Bones makes his Smallville debut and we get reminded that Ma Kent was once the Red Queen.

Here are two of the series covers, again by the very talented Cat Staggs: 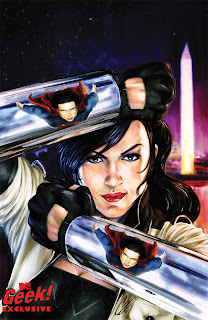 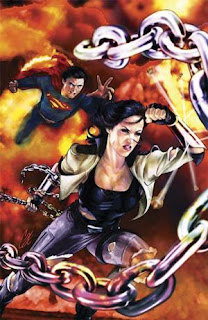 Most of this art in this post has been nicked from Supergirl Comic Box Commentary.

Super Silly Sunday - this is not real Scottish slang 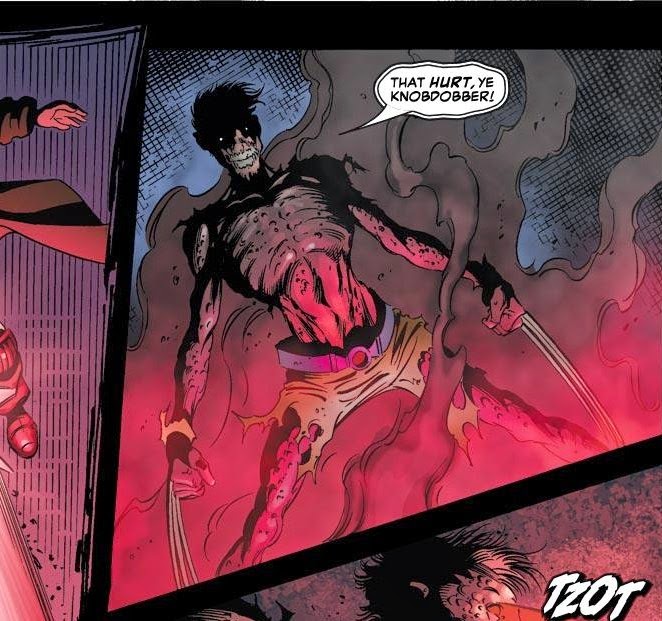 (This is taking a lot of nerve to post.  Feels like a landmark moment for me).
Posted by Saranga at 4:45 pm No comments: