So I promised you a post on how I made my Jay Garrick costume (see here and here if you haven't already).
EDIT- eek, I realised I hadn't credited the blog which gave me a start on working out how to make it!  Anyway, the blog in question is Speed Force and the 2 blog posts in particular are this one and this one.  I didn;t end up following their method, but it was certainly good food for thought.

First I looked for the jeans and boots.  Jeans I finally got from Next, after trying several on from New Look, getting stuck in some (very embarrassing), ordering the wrong ones from the shop and then returning them.  It all turned out OK though, because the pair I ended up getting from Next had belt loops round the top of the jeans, not on the hips, and were, I feel a better colour and fit.

The boots I bought off ebay very cheaply.  They arrived in gold condition with little kitten heels.  I was going to save them for the con but then ended up wearing them to work for one day, by which point the heels were ground down and, well, fucked.  But that's OK, because they should really be flat anyway!  By the midday the left boot's sole, which had been glued on in the manufacturing process, was half off, but it did end up lasting the day, just.  I shall see about getting them resoled to last.  I quite like them and re-soleing will be cheaper than buying new boots.

I ended up not trying to do wings for the boots, because a) I couldn't figure out how to effectively attach wings to the boots, b) I wanted to wear them again, c) I'd feel silly later in the day, away from the con, wearing winged boots and d), I was scared about making them and worried they'd go wrong.
I decided having un-winged boots was OK as jay doesn't always wear winged boots (thank you artists!).

The belt I only remembered 2 weeks before the con.  This left me with a bit of a problem, because the shops round where I live don't sell black leather belts with plain rectangular buckles.  So I found this on ebay: 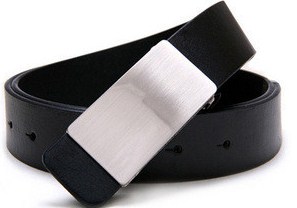 It's perfect!  I thought I'd just need to get a lightning bolt engraved onto it (cost would be about £15) and It would be good to go.  Plus, I'd then get a really cool belt to wear at other times.
Unfortunately it didn't look like it was going to arrive in time, so I bought a very similar belt, but made out of canvas, not leather, from the local market and stuck a lightning bolt charm on it.  Et voila: 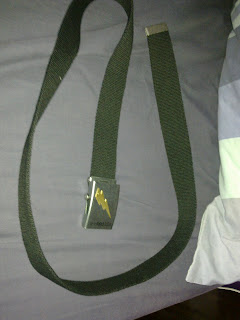 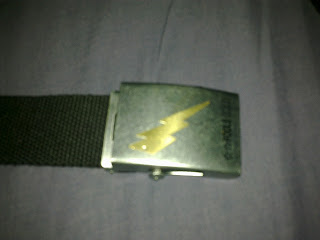 Yes I know the text on the buckle isn't accurate, but I had to make do, OK?

Because the buckle was slightly curved the charm fell off at some point during the day.  Nevermind, I will be getting the leather belt engraved with a lightning bolt symbol anyway.

I already had the T-shirt so nothing needed doing there.  I considered buying a long sleeved red undershirt but decided I'd be perfectly happy going as the summer style Jay.

Now the hat!  I got it from ebay.  I searched for 'World war 1 Tommy replica helmet' and it came up.
I took the straps off, then sprayed the underside and topside with primer over a couple of days.  The top side got 2 coats, the underside got 1 coat.  I did this in the shed each morning and left the hat in there all day to dry, taking it in the house at night.

However, due to low temperatures in the weather, parts of the primer looked like they crystallised a bit. Once I'd sprayed 2 coats on the outside of the helmet and 1 coat on the underside, you really couldn't tell any problems though.  Although you could tell that little bits of dirt etc had got caught in the paint as it was a bit bumpy.  I think it could have done with some sort of finishing paint, as it is now covered in fingerprints and hints of paint came off on my fingers during the day.

Then I started on the wings.  Well, my boyfriend did.  He cut out paper templates for the wings.  We decided on sharped edged wings over Jay's traditional wings because it would be easier to cut out and craft.  Dan rolled out the fimo and used a craft knife to cut the shapes out.  Et voila: 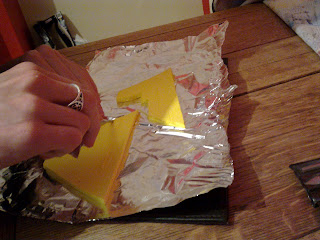 Once cut, he used a thin stick, like a chopstick, to carve grooves into the wings, like so: 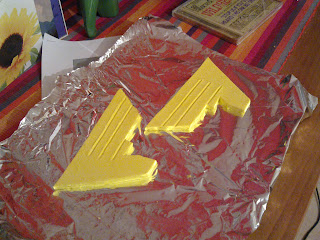 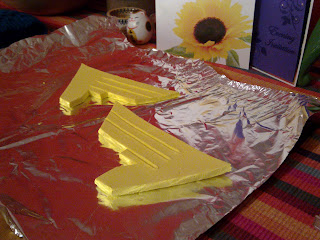 As you can see, they aren't fully correct Jay wings, but I liked the angularness.  I think it fits with the lightning bolt theme and the zippy fastness of the Flash.  We left them to airdry overnight.  2 days later we noticed they hadn't dried flat and instead had a slight curve, thankfully, the non-scored sides were the concave sides (whew). 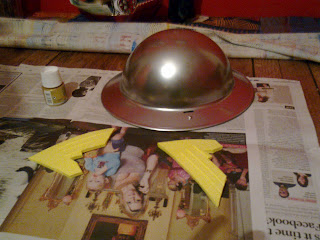 I used gold acylic paint, soluble in water, to paint the wings.  They came out nice and shiny.  One point to remember - if you use paint that's soluble in water, make sure your paintbrush is dry before applying a second coat of paint.  Eek. It turned out OK, but I was a bit concerned for a while.  Here are the finished wings: 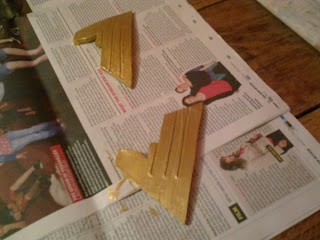 Then we had to glue them onto the hat.  We didn't use superglue, we used epoxy resin.  The boyfriend thought it would be better than superglue.  I went along with him.

We decided to place the wings a little way above the hat brim.  We put glue on the bottom inside of the wings, the handle like bits below the main body of it, and held the wings in place for 6 minutes (as instructed on the packet).  Then we noticed that they were slipping, so held them in place again for a further 5 minutes, at which point they were properly attached.  Here's a view of the hat from the front. 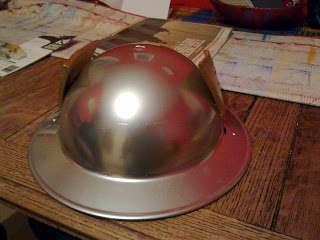 The next morning the wings were still in place (whew, I was so relieved), and this is a picture of the helmet from side on: 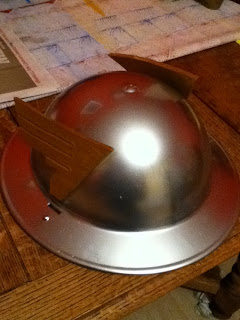 I think it looks fricking awesome.  The wings stayed on all day until I put the helmet in a bag (n the evening, after the con), then one came off, but it is still in one piece so will be glued on again at a later date.

I put the straps back on the hat as I wasn't sure how well it would stay on.  As it turned out, the helmet jammed on my head pretty well (when I'd put my hair back in a bun) but did end up a jaunty angle for the afternoon.  I tucked the straps under the helmet, above my head, so you couldn't really see them.

And this is the finished thing:

And as I write this I have just seen Jay's new costume in the nu52.  Oh my gods it is awful.  Jay, well Jay had style.  He was unpretentious.  He dressed simply and traditionally to get the job done.  Ok, so the hat is flashy (pun not intended), but Jay is a man of the old school and he'd know the historical/mythic connotations of the hat (I have no idea if there is an in canon explanation of the hat, but that's my theory).  He has integrity, and honesty and loyalty and dedication and his costume reflects that.  It's old fashioned (those high jeans!0 but he's old fashioned.

This new costume isn't him.  There's no style, no character, the headgear is fucking ridiculous and the ribbed part on the top are pointless.  It's awful.
Posted by Saranga at 12:00 pm

Amazing! You did a fabulous job.

All I need is the shirt.

Looks awesome! How did you find the hat? All I can find is finished expensive versions

Great job. I am going as him to Megacon in Orlando next April. I just ordered the shirt from Etsy. $15 for short sleeve. I saw a long sleeve for $28. I plan to get that one also. Thanks again.

I found the hat on eBay. I searched for something like ww1 helmet.

Thank you and have fun!

Guys! If you're in the US, The National WWI Museum and Memorial has plastic tommy helmets for $7. With shipping it's about $13. It took a lot of searching, but I'm glad I found it because almost all the ones on ebay are real and old rusty ones that are super expensive.