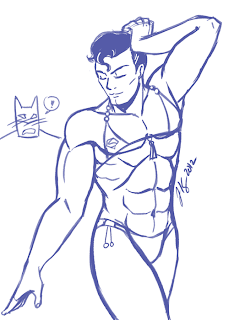 By Jean Kang.  Originally seen on this DC Women Kicking Ass post.
Posted by Saranga at 12:00 am 1 comment:

(edited and re-posted to add in picture)
Today, the 21st of June, is the longest day of the year.   Where I live, the sun rises at about 4.31am and will set at about 21.22pm.  The Greenwich mean time website states that the solstice starts on the 20th June at 11.09pm, which has led to many people saying saying the Solstice is on Wednesday, but given the adjustment for British Summer time, the Solstice really starts at 12.09am on the Thursday (although I will admit I'm not quite sure what that means).  Not that it really matters when people celebrate.  I'm just pernickity.

Another name for the Solstice is Litha.  Isn't that a gorgeous word?  It's rich, full.  It rolls off the tongue.  It's thick with possibilities.  It's a good word.  I like it.

So, the longest day of the year?  Well Wednesday and Tuesday gave us beautiful, sunny weather.  the forecast for Thursday is to rain, from 9am to 11pm.  Oh well.  The Solstice is the crown of summer.  The daylight is strongest (metaphorically anyway) and we get the most light (when it's not cloudy).  As seems to be the way this year, I haven't had much time to prepare.  I made a moussaka Tuesday evening which went a bit wrong, but ended up tasted fine, and I have far too much veg in the fridge.  I went a bit overboard with the shopping on Tuesday.

Nevertheless, we will probably have leftover moussaka, with extra veg, a glass of wine or two, and I hope to be able to make honey biscuits.  Honey is always a good celebratory food.

I hope to be able to upload a picture of my decorations on Wednesday evening.  They've turned out rather nice this year. Here's a picture of the decorations.  Arty shot courtesy of my boyfriend: 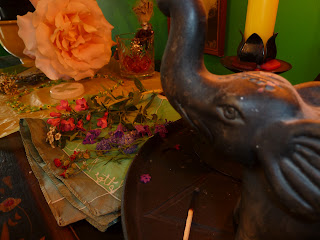 Merry Litha everyone. Have a great day.  :)
Posted by Saranga at 9:30 pm No comments: 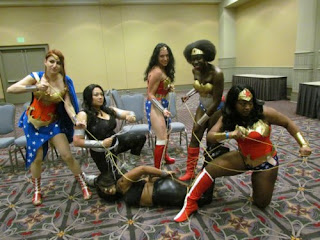 Go to the DC Women Kicking Ass post for more pictures of this utterly awesome cosplay.
Posted by Saranga at 12:00 pm No comments: 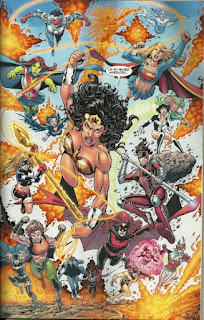 I think this was from the final Wonder Woman issue before they rebooted her, before they did the whole company wide reboot.  The issue before Straczynski's run.   Found on DC Women Kicking Ass.

I really want to know how that cover got created.  It's obvious that effort has gone into it, because the colours and inks and her face shape are lovely.  And we know Guillem March can draw decent looking sexy women.

I mean, I wonder if he drew something more anatomically accurate first, then was told to make it more sexy.  It's just bizzare.
Posted by Saranga at 8:24 pm 1 comment:

Not neccessarily for the short skirt and bared midriff, but for the utter self assurance and confidence, and the knowledge that she can take anyone on.

(Darn, accidentally hit post on Monday... have now rescheduled for Saturday...)
Posted by Saranga at 12:00 pm No comments: 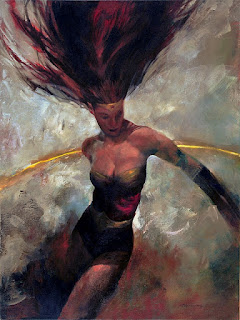 By Christopher Moeller, found on the DC Women Kicking Ass tumblr.
Posted by Saranga at 12:00 pm No comments:

I found these on Ragnell's tumblr: 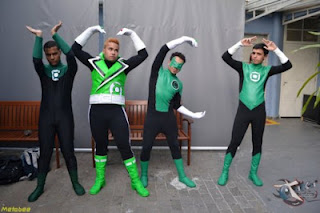 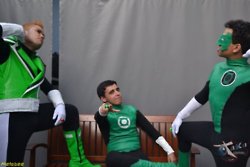 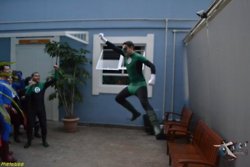 I love them.  I bet Ice asked Guy to do this.  That's the only possible reason he'd do the YMCA dance.
Posted by Saranga at 5:04 pm 1 comment: 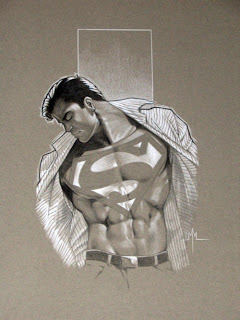 So I'm thinking of starting a new Saturday theme.  Prompted by this.  Posting images is easier and less time consuming than actual blog posts.

Teaching women how to act and how this corresponds to rape

I just found this on One Dark Angel's tumblr, and it's brilliant. I've read something liked this before but it bears repeating, particularly because it articulates it so well (trigger warning):

If we teach women that there are only certain ways they may acceptably behave, we should not be surprised when they behave in those ways.

And we should not be surprised when they behave these ways during attempted or completed rapes.
Women who are taught not to speak up too loudly or too forcefully or too adamantly or too demandingly are not going to shout “NO” at the top of their goddamn lungs just because some guy is getting uncomfortably close.

Women who are taught not to keep arguing are not going to keep saying “NO.”

Women who are taught that their needs and desires are not to be trusted, are fickle and wrong and are not to be interpreted by the woman herself, are not going to know how to argue with “but you liked kissing, I just thought…”

Women who are taught that physical confrontations make them look crazy will not start hitting, kicking, and screaming until it’s too late, if they do at all.

Women who are taught that a display of their emotional state will have them labeled hysterical and crazy (which is how their perception of events will be discounted) will not be willing to run from a room disheveled and screaming and crying.

Women who are taught that certain established boundaries are frowned upon as too rigid and unnecessary are going to find themselves in situations that move further faster before they realize that their first impression was right, and they are in a dangerous room with a dangerous person.

Women who are taught that refusing to flirt back results in an immediately hostile environment will continue to unwillingly and unhappily flirt with somebody who is invading their space and giving them creep alerts.

People wonder why women don’t “fight back,” but they don’t wonder about it when women back down in arguments, are interrupted, purposefully lower and modulate their voices to express less emotion, make obvious signals that they are uninterested in conversation or being in closer physical proximity and are ignored. They don’t wonder about all those daily social interactions in which women are quieter, ignored, or invisible, because those social interactions seem normal. They seem normal to women, and they seem normal to men, because we were all raised in the same cultural pond, drinking the same Kool-Aid.

And then, all of a sudden, when women are raped, all these natural and invisible social interactions become evidence that the woman wasn’t truly raped. Because she didn’t fight back, or yell loudly, or run, or kick, or punch. She let him into her room when it was obvious what he wanted. She flirted with him, she kissed him. She stopped saying no, after a while. 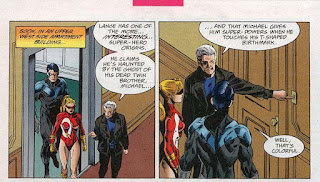 From The Titans 36 I think.

I want that power!  Ridiculousness.
Posted by Saranga at 12:00 pm 1 comment: