The shooting in Aurora

Now I wasn't going to say anything about this, because what can I say that hasn't already been said?  It's obvious (to the vast majority of people) it's a tragedy.  It's obvious that lax gun laws are part of the problem, it's obvious that banning cosplay and comics and pop culture is not a solution.  But then I read something on Willow's tumblr (which I whole heartedly recommend following, because Willow is brilliant), re-tumbled from Gail Simone's tumblr, who wrote the original piece.  I shall cross post some of the words here:
*****************
We have been stories of impossible heroism that occurred that night in that theater. Jarrell Brooks, just nineteen years old, had an exit out of the theater, and went back in to help a young mother and her two daughters get out, getting wounded in the process.

Three men gave their lives using their own bodies to shield their girlfriends; Jon Blunk, Matt McQuinn, and the member of my friends’ party, Alex Teves. All three threw their girlfriends to the ground and put their bodies in the path of the bullets. Not one of these men was yet out of his twenties.

Stephanie Davies, when her friend was shot in the neck, dropped to the floor and held pressure on the wound while the gunman was still firing, instead of making for the exit, quite likely saving her friends’ life.
Mike White, Sr., after his son, and his son’s girlfriend were shot, removed his shirt to apply pressure to her wound to save her life, and then as the gunman approached, put his body on top of hers to take the bullets if necessary.

There’s more, but this is what I keep thinking about.

I write stories about morals all day…stories about fictional heroes and fictional villains. And I want to believe they have influenced my life, that they have taught me to stand up when called upon, to try to do the right thing even when it is a sacrifice.

Few are called upon like the heroes of Aurora that night. They remind me what heroism really means. They give me hope. In the middle of the despair and shock, these people saw what needed doing and did it, regardless of the cost to themselves.

A lot has been made of the idea that the gunman was influenced by a fictional villain.

But I think it’s very telling to note that all those heroes, all those amazing, remarkable, beautiful people, came not just to see the latest Batman movie…they went to the first possible showing, a midnight show. They wanted to see Batman. I have seen the power that character has, I have felt it myself. He doesn’t kill, he doesn’t use guns.

He’s a good guy. A hero. A protector.

I don’t think it’s a coincidence that THOSE remarkable people were there to see a movie about a hero.

So it's not comics which are the problem.  It's people. It's wider society. It's wider culture.  It's being disempowered and angry and having a whole host of other problems that cannot simply be boiled down to one small part of popular culture.

Blue and Gold together for life 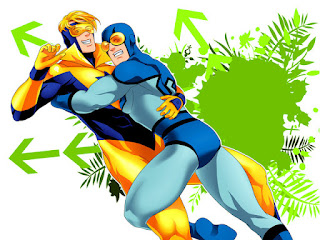 I did a google image search for green arrow dcau figure and this picture came up, on this website: http://www.crunchyroll.com/anime-feature/2012/07/20/feature-fanart-friday-dc-comics-edition.  It's by this person:
http://www.pixiv.net/member_illust.php?mode=medium&illust_id=11749449

This was nearly a super sexy saturday post, but I then decided it's too cute to be sexy.  More affectionate than sexy.

(and yes, I may have more time on my hands now so you may see a whole lot more blogging from me.  or you may not. we'll see.)

I did watch some of the Olympics ceremony last night.  I am confused by it.  I honestly don't know if I enjoyed it or not.  It was bizzare.  Will possibly have some more thoughts later, after I've watche dit properly.

Meanwhile, have a Super Sexy Saturday y'all!
Posted by Saranga at 12:00 pm 2 comments: 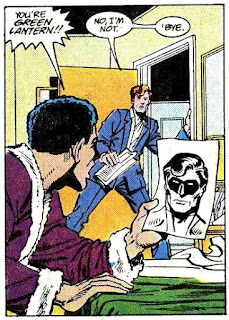 (nicked from the boyfriend's tumblr)
Posted by Saranga at 12:00 pm 1 comment:

Just a bit busy.  I've had 2 of my clips for my BSL Level 3 accepted (woop woop!)  and have filmed 2 more that I hope will be accepted, so I;m abotu halfway there. Hurrah!  I also passed my driving test on attempt number 5 :D  Can't afford to buy a car though..
Things on my house front are looking up..we're getting lots of viewings so hopefullt some bugger will want to buy the damn thing soon...

I also read all 4 twilight books in 1 week.  I liked them.  I can see why people don't.  I think they don't because Twilight is very much a teenage girls romance fantasy, with supernatural elements.  I thought it was a lot of fun.  It surprises me that people think Bella is cowardly or insipid though.  She's not. She's central to every fight and does a lot of things that terrify her.

And today I was pointed towards this, which is explanation enough for why I'm vegetarian:

It's really disgusting.  I can't believe I used to eat clams.  That is also reason enough why I don't go in the sea.  Eurghh.  Thanks for pointing that out to me Phillipa...
Posted by Saranga at 6:52 pm 3 comments:

Megan of the Women Write About Comics blog interviewed me, as part of her series on women's comic bloggers.

You can read it here.  I talk about Supergirl, and signing, and LGBT characters, and comics for new readers and other stuff.

Thank you Megan for interviewing me, it was a pleasure!
Posted by Saranga at 9:28 pm 1 comment: