brace yourselves, this ridiculousness came from Action Comics 8 (DC New 52) and is one of the funniest things I've seen in a long time...(and possibly scariest)...

I went to Holland recently and ate at a wonderful little restaurant in Ourddorp with a choice of vegetarian dishes.  Amazing.

It also had a rather wonderful name and theme: 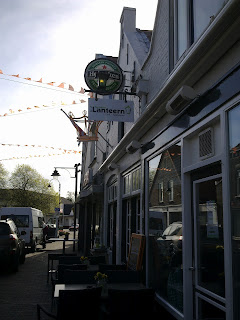 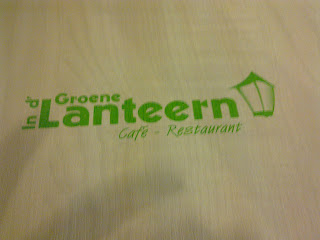 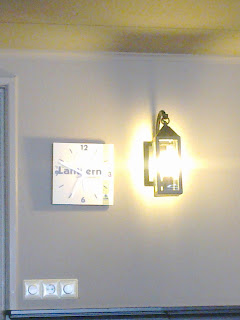 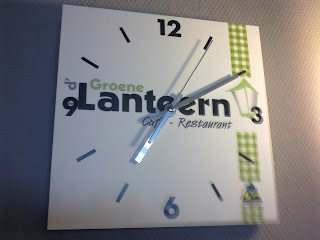 The staff all wore checked green shirts, like the pattern on the clock, above and the picture sont he wall were black and white 40s/50s ish images with green check detailing.  The food was good and reasonably priced.

What a lovely little nerdy find. 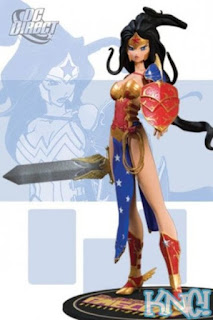 This is in honour of the announcement from a couple of weeks ago that DC are doing an Ame-Comi Girls digital comic.  I can't wait! I absolutely adore this costume for Diana, and the creative teams look pretty good too!
Posted by Saranga at 12:00 pm No comments: 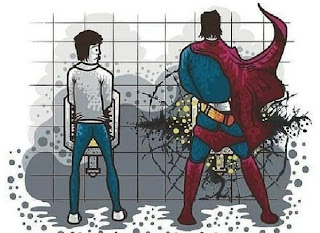 I got this from the @SupermanTweets twitter account.  It made me laugh.
Posted by Saranga at 1:33 pm No comments:

If you follow me on twitter you'll know I've been reading Gotham Central ($71 American, £51 Sterling).  It's really rather good. I have just 4 issues left to read in the series, and I'll mis it when I've finished it.

Surprisingly though, i think I might be turning into a Batman fan.  I've pretty much always been interested in the Bat fmaily, but not so much in Batman.  However the dead Robins storyline (issues 33 to 36) involved one of the cops shooting at Batman, and him punching her in the nose in revenge, then nicking her gun.

She then spends the next few days panicking about what the Captain will say, while the rest fot he cops are tryignt o hide it from the Cap'n, who predictabel goes ballistic when she finds out.  Meanwhile the one civilian in the station is meeting Robin on the roof and arranging to get the gun back.  When the civvy gets it back she tries to give it to the Batman shooting cop but she's all too busy with the dead Robins case to talk to the civvy. When the Captain confronts the Bats shooting cop about shooting Batman and then losing her gun, well it all works out ok and everyone's bacon is saved.

It just reads like a ridiculous little farce, some light entertainment and some incredibly childish adults.  It's great.  And it's made me kind of like Batman.

Email ThisBlogThis!Share to TwitterShare to FacebookShare to Pinterest
Labels: batman I'm having to free up shelf space so am sadly selling some of my comics.  One set is Wednesday Comics, the other is Buffy the Vampire Slayer Season 8, issues 1 to 32 with a few one shots.  the Buffy comics are being sold by story arc, for example, The Long Way Home is one listing.

We reviewed Wednesday Comics here.  There are some really, really great stories in there.  The Supergirl and Wonder Woman ones are my favourites, and are great for younger readers.

We talked about the Buffy season 8 issues here.  Again, there are some quality stories and quality issues in the run, and if you are a Buffy fan you will probably get a lot of enjoyment out of the issues.

The full ebay listings are here, they will be live for 7 days.  Please bid!

Coming out in Comics: Renee Montoya

I recently bought the Gotham Central series from Comixology (don't ask how much it cost, eep), and am pleased to discover it's the series that outs Renee Montoya, then a cop in the GCPD, later The Question.

Gotham Central is about the GCPD, the people working for it and the cases they investigate.  On issue 6, Greg Rucka takes over writing duties for the Half of a Life arc, outs Renee and wins an Eisner award.  A well deserved trophy I reckon.

So, Renee is being sued by a criminal who got off from a rape charge.  She comes into the GCPD HQ one day to find her colleagues crowded around the notice board. 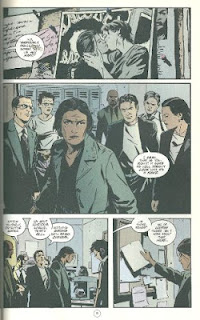 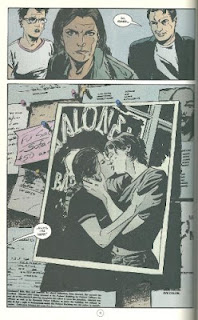 The photograph was taken by the criminal who is suing her and has sent the copies to her workplace and her parents.  Neither of whom she was out to.

I recommend this arc to all fans of Renee Montoya, Gotham City, Batman's supporting characters, and LGBT comics fans (and potential fans) everywhere.  It's seriously good.

I think it's been traded but you can also buy the issues digitally from Comixology.

Many thanks to DAJB of Broken Voice Comics for sending me the scans.
Posted by Saranga at 7:22 pm 1 comment:

So last weekend I took part in a panel at Eastercon, the British Sci-fi con.  The topic was Comics outside the mainstream.

It was fun, the hour went really quickly and I didn't feel stupid.  The audience was good and no one was an argumentative sod, which was my biggest fear.  I kind of want to do a full write up, but I'm quite tired, as yes, I've been doing homework each night, having driving lessons and working. So here's a brief outline of what we discussed:

What 'mainstream' means - are vertigo comics mainstream?   has this changed over the years?  What constitutes mainstream in manga and manwha books?
Do people who read 'graphic novels' see themselves as in the mainstream or our of it?
is there a distinction between comic readers who read only superheroes, only vertigo, only graphic novels, or only webcomics - is one more mainstream than another?
What non-mainstream comics are out there for women?
How effective is marketing for women (and other) readers, and how women (and men) as readers react to the big 2  marketing to the 18-35 male demographic.
The (un)success of DC's Minx line.
We talked a brief bit about films of comics.
Where to find webcomics and what good ones are out there.

We also recommended quite a few books - I talked about Skal, Cinebook's entire catalogue, Bayou Arcana and Markosia publishing.  One of the other panellists recommended Fumi Yoshinaga's books, especially the restaurant manga (she also does good yaoi stories).  The moderator recc'd a comic version of Hamlet, which I can't quite remember the details of now.

Various audience members also recc'd comics, one of which was Gunnerkrigg Court which I keep meaning to read.

It was a lot of fun.  I'd love to do more panels.  I mentioned a I ran a couple of comic blogs but I don't think I namechecked New readers...starter here! Damn.  That was stupid.  I also didn't mention that I go to non mainstream comics for diversity in writing styles, story types and character types.  That was stupid.  Doh.

The same weekend I also met my fresh 3 week old niece and she's totes adorable :D  And sleeps most of the time (even more adorable) and didn't throw up on me (good child).

Hope you're all well out there in blog land.  This is the first time I've logged into blogger for a few weeks, and now I find it's got a new format.  I do not like this.  Bah humbug.  I just finished reading the new edition of Batman: No Man's Land - these new versions are collecting all the NML issues, unlike the first set of trades which only collected half of them.  This first volume is great.  I highly recommend it.  Now I'm gonna go read Gotham Central, which I just downloaded from Comixology. :D  All $79 worth.. eeeeek...
Posted by Saranga at 8:26 pm No comments:

There's a lot that is silly in Supergirl 7.
Firstly, the cover, featuring Supergirl and Zatanna in a struggle to win the abominable snowman.  He doesn't look too happy about this. 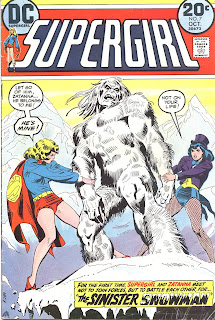 Zatanna shows her true feelings, in a rather charming way.  Does anyone say terrific anymore?  Aside from when they are addressing Mr Terrific of course?  Sad days, it's a good word and should be used more often.  Although perhaps not in the way Zatanna is doing it. 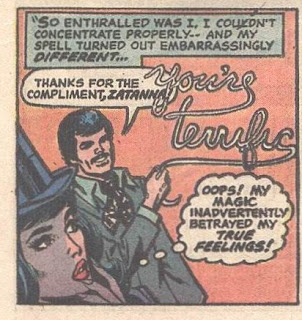 Then Zatanna starts following a magic, floating boot.  Possibly belonging to the terrific fellow above.

Oh hullo dodgy science!  What silver age story would be complete without you? 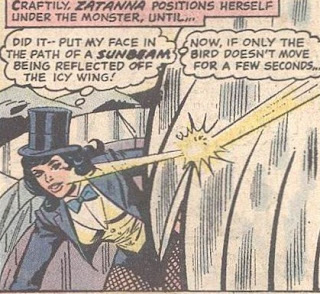 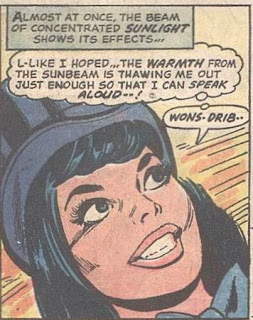 And lastly, super karate.  Ah to make anything personal by putting 'super' in front of it. 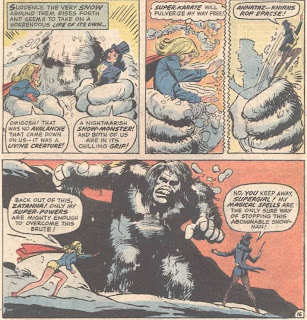 This issue is well worth a read, if you can find it.
Posted by Saranga at 12:00 pm 2 comments: