This is not Artemis

Artemis - different hair. not asian. wears clothes. If you wish to sell titillating manga style pictures, by all means do so. But please do not label it Artemis unless you wish it to be recognisable as her.

Edit - actually, I don't mind her being asian. I mind her being generic with no individual recognisable characteristics.
Posted by Saranga at 5:12 am No comments:

How to draw men in tights

Comic artists, when drawing men in spandex, please take note of the picture below. 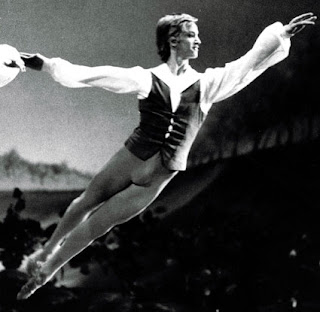 (Dominic Tuck, deaf ballet dancer).
Men in tights do not tend to be sexless. Please draw in the requisite bits.
I thank you.
Posted by Saranga at 9:46 pm 1 comment:

Oy this again
I don't want to be protected. I want to be able to protect myself (quite possibly with high kicking kung fu moves. This is why I like Black Canary so much).
Christian vlaues did not stop sexual exploitation from flooding the town square. That's why there's always been prostitution. And rape. Sure, it may have kept it out of sight and condemned the women more than the men, but..oh right..that's not good is it?
The chilvalric code kept politeness but maybe not respect? I'd rather respect.
I don't want a society where the solution to gender inequality is that women have to rely on men to protect them. I want a society where I am not at risk of being raped, or mugged, or threatened or leered at. I want a society where the words slut, whore, slag, etc are not insults. Because it shouldn't matter what a women does in her privtae life. having sex does not denigrate her status as a human being. And using these words as insults does denigrate women.

Right now I'd settle for comics and literature that show a wide variety of possible nasty things that can hurt women at night. And also shows these women turning to face their intended attackers and having some power.
Let me explain. Currently, when women in comics are walking alone at night, one or more men will turn up, leer at her, and make sexual violence threats to her. You know, they never wanna just mug her or beat her up. there's always the sexual undertone. And the women always scream and run. They never turn round to face their attacker and stand up for themselves to fight, or laugh in their face, or anything. Their role is to run away. Fine, in the real life I guess this happens a lot. But I am sick of reading of women as victim. Some women fight back you know.
Some women aren't victims. I read a story in a women's magazine a couple of years ago where this women 'talked her way out of rape'. She got in a dodgy cab, the faux taxi driver drove off in the wrong direction, she realised what was happening and screamed and yelled and took control. She didn't get raped. (I can't remember how she got out of the cab - I'm 99% certain she wasn't left in the middle of nowhere though.)
So you know, it does happen. we can take control.

So stop showing me fiction where women can't help themselves. That doesn't gel with my experience as a woman. And I don't get threatened with rape every time I go outside at night.
Posted by Saranga at 9:40 pm No comments:

Well I've just got round to reading Elseworlds Finest - Supergirl/Batgirl. I must say that Supergirl is absolutley lovely in this. She looks so strong, personality, not just body wise. There are lots of good things with this, but just a few bad things too. :(
Good: Hawkgirl's muscles!
Bad: Batgirl posing on page 2. I know she's meant to be drawn like Batman usually is, one leg resting on the ledge. And at first glance it looks pretty awesome, but then I look again, and it seems like just a little too much emphasis is placed on her boobs and butt. And I don't think spines work like that. (Unfortunately I don't have a scanner so can't post up pictures).
Good: Batgirl looking ominous with the cape on page 4. Shrouded in the cape. Teh awesome.
Bad: Batgirl having her suit actually sprayed on. Give me a fucking break.
Good: Diana in full trousers. A black Captain marvel. A black Black canary. The new Flash costume. Mmmm, streamlined. (But why also the mainline continuity Flash, Captain Marvel and Black Canary? What am I missing?)
Also good: Big Barda. Look she's just awesome ok?
Tre Good: Supergirl's tall! Like really warrior woman tall! Taller than Lex. Awesome.
Good: Page 13. Lex: 'We should have dressed you up - had a gown designed - something befitting your angel image. '
Supergirl: 'Flying down over them in a dress? That's not the image I wanted them to have, Lex!'
Hell yeah! (Do you hear me Michael Turner?)
Bad: We could have done with a bit more depth as to why Batgirl banned metahumans from Gotham.
Good: Page 18. BOOM! You gotta love anything that geos boom. You just gotta.
Meh: Oracle. meh. Tim Drake as the JSA stooge.
Bad: Why the JSA? Why not the JLA?
Good: Batgirl gets to look moody and stubborn just like regular universe Bruce. No pouting. No lippy. Just. 'I said I had it under control.' *scowl*
Supergirl with firey eyes.. Supergirl smash.
Good: Child Barbara with the gun. Oh hell yes.

So all in all, they managed to remove a lot of the women-for-the-male-gaze-only type art. Which is yay. Pity some slipped through. Booo.

And compeltely away from the women art etc subject. I'm not sure You can call this Batgirl part of Elseworld's finest cos she's not heroic enough.. 90% ofwhat we got was Batgirl as tyrant. Not Batgirl as hero. Still. Have a star for trying.
Posted by Saranga at 8:06 pm 3 comments:

5. SUPERHERO NAME: (2nd favorite color, first tool that comes to mind, put “The” at the beginning) - The Blue Chisel

Heh. fun. Now i'm off to read my dazzler comics. Cheerio.
Posted by Saranga at 7:02 pm No comments:

Oooh I quite liked this one! After the disaster that was episode 6 I did think that only the odd numbered episodes were gonna be any good. I was wrong. Number 7 was awesome, number 8 was pretty cool. However, I did note some superdickery going on.

If Clarke had stopped to think for a minute he have realised that Lara can probably handle herself, under the yellow sun and all. Get over your hero complex mister. And secondly, leaving the very human (ex?) love of your life alone with Lara, who has a homicidal superpowered kryptonian after her? Lana's gonna be able to help how exactly?!

And Lana. Lana Lana Lana Lana! Clark whinges about his lost mum, and it's all about you is it? Oh I know how you feel Clarkie, I miss my mum too, moan moan moan. Huh? How is that relevant?!

But ooh, Richard is Julian Luthor! Ooooh! I thought they were going for homoerotic moment between Julian and Lex there. Until the brotherly connection was realised. Damn shame that. I'm up for a bit to man on man action in this show.

Overall, 4 out of 5 stars.
Back to how the shows been doing -
Bizzaro - tre Awesome. But the first episodes always are, finishing off the cliffhangers form the previous season and all. And this version of Bizzarro is sooo much better than the my-head-hurts-to-read-it comics version.*
Kara - Mmm. Good. I liked the snarky and the sizing up of each other.
Fierce- Absolute rot. I think I may have documented my thoughts before.
Cure - Hmm. As I recall, this was so so.
Action - ahh, knowing meta fiction narrative methinks! Yeah, this rocked. Nice WiR debate too. Made me chuckle.
Lara - was this the one where we learnt half of Krypton has visited earth? If yes, then this is the one that really sucked.**
Wrath - Oh yeah, evil Lana, plot and character development, oh yeah! good one.
Blue. Yep. Already done this one.

Which was the one with Lana keeping Lionel captive? Cos that was also the awesome.
I think I just

I had 6 mince pies and frozen mango for my dinner. Not at the same time. I'm not sure if I'm proud or not.

*except for Bizzarro Linda Danvers Supergirl. She's adorable and I think I want a pet one.
**I'm willing to concede that my views on this are down to the fact that I'm a it of a purist. Part of the pleasure of the Superman mythology is that he was sent to an unknown planet and there are very few others that share the knowledge. Allowing all his family to visit kind of ruins this. (Then again, I've very much enjoyed the recent comics third kryptonian storyline.)
Posted by Saranga at 11:56 pm No comments:

Stupid stuipid episode. Why have Lara et al come to Earth? Why choose to make a superhero show and then fuck about with the main elements? I wouldn't have any objections if it was done well, but that was stupid.
And it appears Clark has Kara's crystal. Stupid. Am now to hacked off to watch episode 7. Grr.
Posted by Saranga at 9:20 pm No comments: