Coming out in Comics - Buffy Summers

Except, she isn't really coming out as gay, she's coming out as enjoying sex for sex sake, and not needing a big relationship or feelings behind it.  Have a peek: 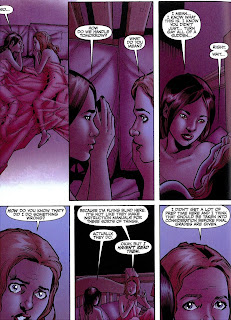 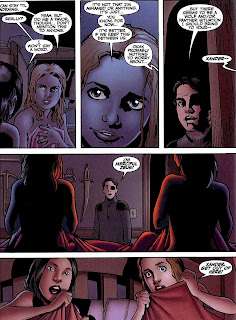 Now, the thing about Buffy is that she tends to get awfully emotionally involved with anyone she has sex with.  First there's Angel, but as her first love and first shag we can forgive her that.  Then there's dickwad at college who exists for her to learn that men only want one thing.  Then there's Riley who was so jealous and insecure about her power he went off to himself sucked by a vampire.  Then there's Spike, which could have been guilt free sex had she not been rather messed up about being dead and alone and was using him.
Throughout all this we can comments about slutty women, from Buffy and the rest of the Scoobies, and we get the show positioning women who enjoy sex as 'bad'.  Until maybe season 6 where Buffy realises, with Spike, that sex can be just enjoyable.  So, I reckon that we've seen some character progression from her.
Finally in season 8 Buffy matures enough and is confident enough to realise that sex doesn't have to come with emotional baggage, it can just be sex.  This is a massive leap forward for her.  And she does it with a woman, one of the other slayers, Satsu.  Maybe this was just a cheap shot by the writers and artists.  Some would say it denigrates bisexual women.  I say nay.  Buffy aint bisexual she's just having sex.  So that aint got anything to do with bisexuality, it's just to do with sex.  Now I believe that you can shag someone and not fancy them, and still get something out of it.  Which is what I reckon Buffy was doing.
Later, we see Kennedy giving Satsu a pep talk about how this doesn't mean Buffy's been turned: 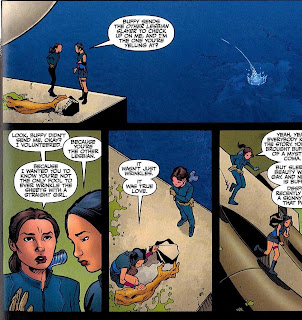 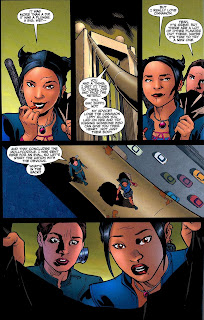 Now, ignore the awful art and how that looks nothing like Kennedy.  It's a little odd how the above scenes seem to infer that Kennedy and Satsu are the only lesbians in the slayer group - I don't know, maybe the slayer potential gene only likes hetero folk..
So.  An interesting way to approach this topic.  Which isn't really an end to a post but I seem to have run out of steam.
Posted by Saranga at 2:29 pm

I'm sooooo left behind on the new Buffy series, like 15 issues behind or something, I'm ashamed to say.

Still, it strikes me as ODD (yes, with capitals) to have Buffy engage on lesbian sex if she's not lesbian or bi-sexual, or even a teenager for that matter.

I can conceive people experimenting with their sexuality when they're trying to define themselves. A lot of gay people has tried heterosexual sex, for that matter. But a secure woman like Buffy-- hmph-- I highly doubt would do such a thing.

[devils advocate mode on]
But maybe she's having sex because she is secure in herself, and just wants to have some fun? Maybe it's not related to how she defines herself?

(nice to see you back around and online by the way!)

Thanks for the welcoming, Saranga :) I was on vacation.

I whole heartedly agree on that she can have sex just for fun, but unless she's bi-sexual, she wouldn't be having much fun while going at it with a girl.

Now, if Buffy was bi-sexual, it would be entirely ok ;)

I think we'll have to disagree here. This may be because I think everyone's got a little bit of bi in them ;)

Ok, but I have to say that I would never touch a girl that way ;)

Sex is fun. And as long as 2 consenting adults do it, what does it matter?

Experimenting and having fun is not only for the young.

Just as love and sex are not the same, being bisexual and having sex with men and with women is not the same. I think bisexuality is about being emotionally connected with both women and men, or finding both genders attractive for relationships as well as sex. And having sex is the physical act, regardless of emotional attachment.

Heck, it's pretty clear that Buffy was just using Spike physically. For her, he was just for sex, not for love. He, OTOH, did love her.

Yep, that's what I was trying to say Red!

A very poorly written review grammatically speaking as well as a blatant bias from someone who thinks being able to have sex without emotion is "progression". I guess everyone's entitled to their opinion, but that's not a notion I can get behind.

Buffy lost me after Season 3, and I'm glad I have't checked out the comics. Anyone who thinks this character derailment isn't a sales ploy is kidding themselves. Buffy never showed a drop of interest in women on the show, but that's never stopped these comics from straying about as far as one can imagine from the show. I see no point in acknowledging they even exist. Kinda the state Joss is letting his once beloved characters fall into.

@Anonymous:
Of course the post shows blatant bias. This is my personal blog.

As you are so negative and didn't watch Buffy beyond season 3, I can see no reason why you commented at all. If I see another rude anonymous comment written in a similar vein I shall assume it is from you and delete all your comments.