Reviews ahead for this lovely lot: 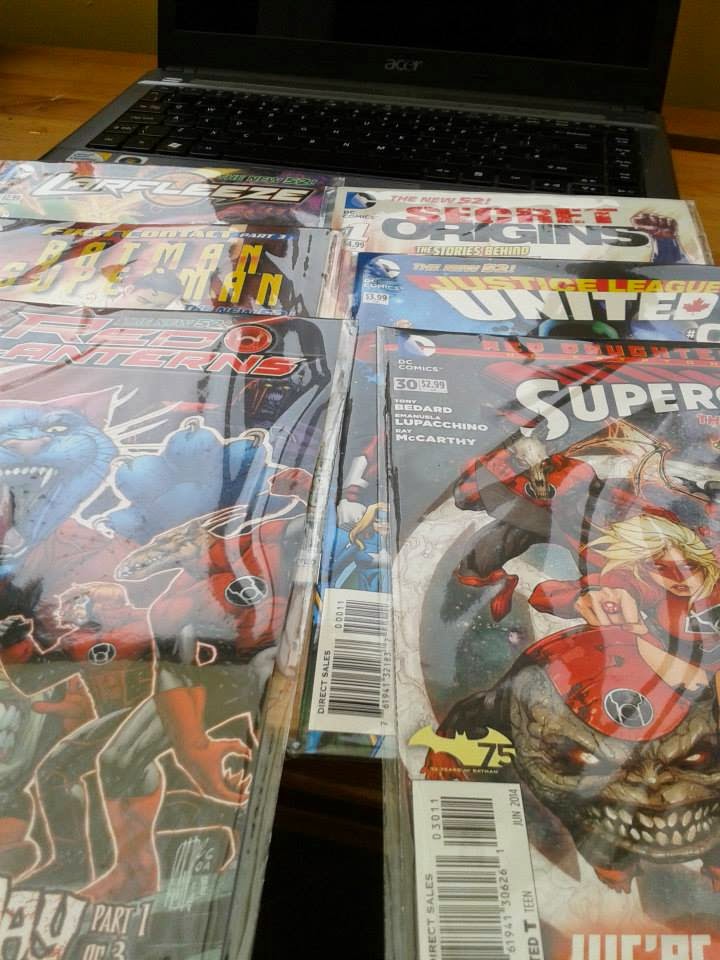 No spoilers in this review - it's short and sweet.

Ultimate Comics Spidey 200
I wasn’t fussed about this.  Too much blathering about Peter and not enough character moments or story.

Harley Quinn 5
Fun, but not outstanding.

X-Men
The start of a new arc that I am not feeling the love for.

Batman and Aquaman 29
This was good.  The art was spectacular and it had enough Arthur in it to push Bats out of the limelight, so I was happy.

Batman and Wonder Woman 30
Also pretty good. The art wasn’t so great but it’s always a pleasure to see Batman and Wondy together.

Wonder Woman 30
The Amazons are back but Hippolyta isn’t.  This didn’t have the thrill of last month’s issue but was solid enough.

I think I’m losing enthusiasm for some of my pull list because I know I’m going to have to cancel them soon.  We won’t have enough money for me to keep buying comics and we certainly don’t have the space.  Because I know I’m going to spend a few years out of the loop I don’t want to read monthly instalments, I want to get lost in big story arcs and hundreds of issues at a time.

For example, I’m reading Secret Invasion and all associated tie–ins (about 100 issues) at the moment.  I read Civil War and House of M recently as I’m trying to get a handle on the Marvel universe.  I’m not going to the dark side, I still prefer the DC universe, but I’m enjoying what I’m reading.  The most enjoyable issues so far are Secret Invasion itself,  New Avengers, Front Line, Runaways & Young Avengers and the Spidey tie-in.  Guardians of the Galaxy, the group that Black Bolt belongs to and Deadpool are not as bad as I thought they’d be, but I am not finding myself moved enough to really care about the characters.  I am very much enjoying the chaos of the secret invasion.

But back to my pull list.  I am currently getting:
Forever Evil, Supergirl (and the Red Lanterns with Kara in) Wonder Woman, Adventures of Superman, Larfleeze, Batman/Superman, Smallville (although I haven’t read it in, I get it on comixology so can catch up at any time), Hawkeye, X-Men, Danger Club, Princeless, Revival.

Of these, I’m going to cancel Larfleeze, X-Men and Revival immediately.  Forever Evil has just one issue to go so I may as well get that.  Hawkeye I will cancel after the June issue as that’s the ASL issue.  I don’t know what’s happening with Princeless or Danger Club but I expect to cancel those from the end of May.  Smallville I will continue to get as and when on comixology.  Wonder Woman I will stop getting once Azzarello and Chiang have left.

That leaves me with Supergirl, Red Lanterns, Adventures of Superman and Batman/Superman.  The latter two of which I love, the former two I buy out of a sense of misguided loyalty.  I have to decide whether to keep these on my pull list, cancel the whole pull list and just pop in to buy issues as time and money allows, or whether to go fully digital.  I’m very sad about having to reduce my reading, but money and the baby take precedence.  My problem is I really don’t have a clue how life will change once the baby arrives, other than being very busy and sleep deprived.  That's not really any sort of idea though, is it?

You may have seen articles in the news about how Malta has a big hunting problem - in the Springtime they shoot the migrating birds. All the migrating birds, including those that are critically endangered. Species like the Turtle Dove are protected in the UK (and across Europe) but the Maltese hunting lobby is pretty powerful and shoots them anyway.  UK turtle dove numbers have dropped by something like 93% since the 1970s, partly due to the shooting, partly due to UK habitat loss (see here: http://operationturtledove.org/).

You can read an RSPB blog here about the shooting:  http://www.rspb.org.uk/community/ourwork/b/martinharper/archive/2014/04/24/migrants-on-my-mind-3.aspx

Birdlife Malta (similar to the RSPB but more focus on birds), have started an indiegogo campaign to raise funds to equip their volunteers with recording equipment (videos etc to show the damage) and campaign for a referendum to ban the Spring hunting season.

They need €50,000 to start. Chris Packham just tweeted that 58 thousand people have looked at the funding page. If everyone gave €1 they would reach their goalhttp://tinyurl.com/kb6vlzn

Please have a look at it and consider donating something, however small. You can use your paypal account to donate.


https://www.indiegogo.com/projects/stop-spring-hunting-on-malta
Posted by Saranga at 12:00 pm No comments:

Email ThisBlogThis!Share to TwitterShare to FacebookShare to Pinterest
Labels: conservation

Posted by Saranga at 1:13 pm No comments:

I didn't mange to get a post up for Ostara in March, chiefly because life got really hectic, then I was away for 2 weeks, and am only just now getting time to breathe.

So Happy Ostara and Happy Easter everybody!  In the UK we have a long bank holiday weekend - 4 days off! - and I am spending it seeing friends, catching up chores and hopefully cooking some good meals.  I would normally make it a point to eat eggs at this time of year, but as I'm only allowed well done eggs - basically hard boiled - I am losing my enthusiasm for them.  On the other hand, since the boyfriend described me as being all boobs and belly last week, I am feeling particularly fecund!

I hope everyone has a great weekend. Here is a picture of this year's Easter Tree: 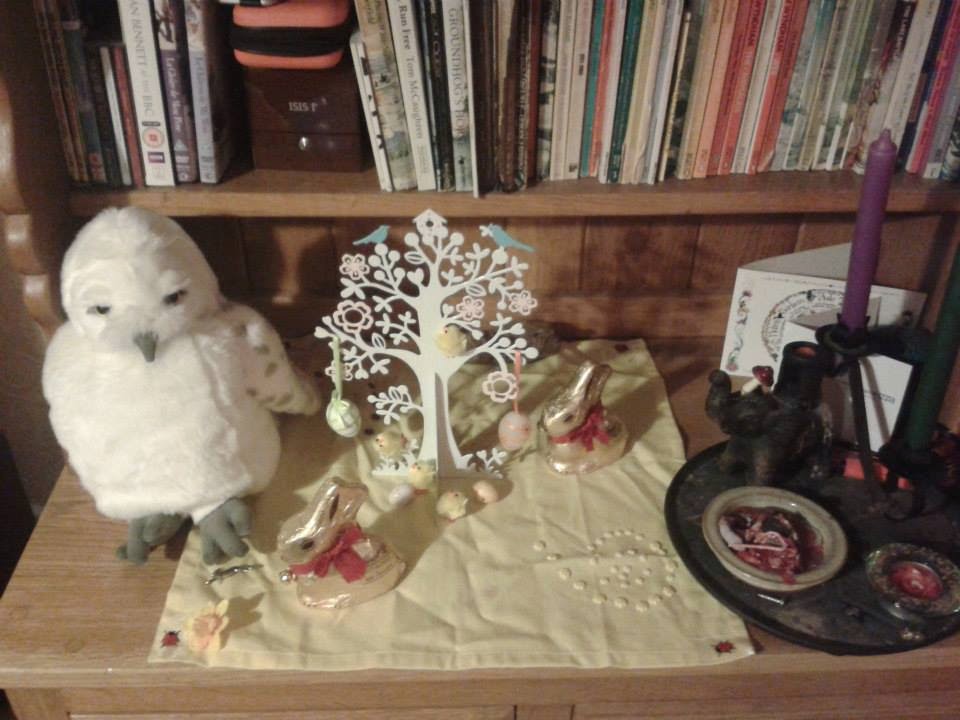 We will eat the chocolate bunnies on Sunday.  I feel like there's a lot I haven't done with respect to celebrating the festivals over the last year.  This makes me sad, as I think it's important to take time out to consider and ruminate on spiritual stuff.  I must rectify this.
Posted by Saranga at 8:30 pm No comments:

I'm a little behind.  Well, I'm about 3 weeks behind I think.  This will be a rapid run through.