Herald book review! That I am shoehorning into the LGBT book challenge!

Some of you may know that the wonderful blogger Sea-of-Green has written a book, AND has had it published.  This makes me incredibly in awe of her.  What makes me even more in awe is that it's good.  It's called Herald and is the life story of the Greek God Hermes (part of it anyway).  I downloaded it about a year ago and finally got round to reading it this Christmas on my BRAND NEW KINDLE!!!!  Which is the most exciting present, ever.  Anyway, since I entered the LGBT challenge I thought this would be a good way to ease myself into it.  Doubtless Sea will be surprised at it being included within the challenge, but bear with me, I think Herald is a valid inclusion.

NB: I will refer the author as Sea, not as Houck, because Houck is a pen name and I know her as Sea.  I will also assume that readers of the post know something about Greek mythology.  If a name or reference eludes you either leave a comment asking for clarification or look it up. 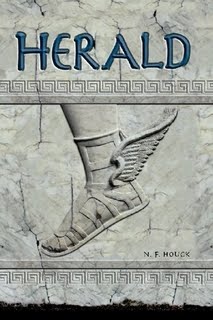 Herald, by N.F.Houck
As a long time fan of Greek mythology and the Greek Gods I'll admit that this book is a typical sort of read for me.  I've always been a fantasy buff and as a kid my favourite books described the Greek, Norse and Celtic pantheons.  However, I have located very few books which turn the stories of the Gods into a novelisation format, and that is what marks this book out as special.

Told from the point of view of Hermes, herald to Zeus and Hades, trickster, liar and god of merchants, communication and travellers, we start with a trial against Hermes, brought by Hera.  This introduces us to the major players on Olympus and helps set up the characters.  The Muses then interrupt the storytelling and insists that Hermes does it properly, so we skip back in time to Hermes birth and his first adventures.  We learn about his relative strength when compared to the other Gods, how he invented the lyre, how he got his winged sandals and helmet and his attributes as thief and liar are developed.  The first trick he plays on his brother Apollo is amusingly told and conjures up some bizarre images of sheep as shrubbery.

Later on in the book we learn about Hermes lovers, his children, the other mythical beings of Ancient Greece (for example Pegasus, dryads and naiads, the Gorgon sisters) as well as the often complex relationship between the Gods.  Through Hermes' eyes we also get to see many other famous stories of the time - Athena's birth, Hephaestos' capture of Ares and Aphrodite, the creation of Winter, as well as touching upon other beings such as Boreas, Adonis, Eris and Narcissus.

Sea makes it clear that the Greek pantheon is vast and she weaves each story and event into one cohesive narrative.  This must have been pretty difficult to do as the Greek stories are not neatly presented anywhere.  Like all mythologies, there are many different versions of each tale in existence and no 'official' linear guide.  It is up to each reader to develop their own narrative and pull out the versions of the stories they feel most comfortable with.  Herald is one such book and the way in which it presents the events is admirable and easily understood.

As for the LGBT content.  Well, the rules of the challenge do say that books with minor LGBT characters can be included.  To that end, let me explain how this book is LGBT friendly.

Apollo - God of healing, music and reason.  In my understanding of the stories he is also closely associated with the sun, drawing the sun across the sky in his chariot, but this is not the case in Herald.  Anyway, at one point in the book Hermes and Apollo are discussing sex and Apollo lovers'.  Here we find out Apollo takes both female and male lovers.  Now, Apollo is a major character in the book, being a close friend of Hermes and one of the 12 Olympians, however his sex life is relatively unimportant to the plot.   At one point we see Hermes and Persephone taking a detour to avoid Apollo and Cyparissos as they are it in a field, but that (and the aforementioned discussion) is all we see of Apollo's sex life.

I ask you, how often do you see a male lead having both male and female lovers?  I know that this isn't a work of fiction on Sea's part, she is working with centuries old stories, but she could have chosen to ignore the God's bisexuality (for want of a better word).  Included in the end notes are these passages:


"Cyparissos is the least significant of Apollo’s male lovers (Hyacinthos being perhaps the most celebrated). However, like most of Apollo’s lovers, he eventually met with a tragic end. (When Apollo mentions this unfortunate trend among his lovers in chapter ιθ′ [19], he’s not kidding. No wonder nymphs ran away from him.)
There’s a common misconception that all of the Greek gods were bisexual, an error fueled by knowledge that pederasty was practiced in some (not all) ancient Greek city-states. To further confuse modern readers, the ancient Greeks didn’t have categories for sexual orientation and didn’t label people as heterosexual, homosexual, bisexual, etc.; sex was merely sex and differentiations weren’t all that important to them.
At any rate, here again the Olympians reflect the different attitudes of the various Greek cultures. In some myths, Apollo, Zeus, Poseidon, and Dionysos had male lovers in addition to female. Hermes, Ares, Hephaestos, and Hades are not known to have had male lovers. "
The preferences of the Gods could have been glossed over.  They could have been presented as entirely heterosexual, or any homosexual acts could have been presented in a negative manner.  They're not and they weren't.

The other LGBT friendly aspect of the book is found when Hermes first discovers his role as psychopomp - escort of souls to the underworld.  In this he discusses how different souls react when they are dead.  Some hold onto their bodily shape, some adopt new shapes:

Sound familiar?  It is not necessary for Sea to include this detail in her book, it doesn't advance the plot, it doesn't affect Hermes, but it's an easy way to acknowledge trans people and to make the book more effective at building a realistic world, reflective of our own.  It's great to have LGBT characters who are leads in a story, but it's also equally important to see them in the background, living normal lives.

Lastly, even though the challenge doesn't cover Intersex characters it's worth mentioning that we get to see Hermaphroditos too.  So named as he's the son of Hermes and Aphrodite.  The naiad Salmacis takes a fancy to him, so much so that she permanently fuses with him - together they become neither male nor female.  Hermaphroditos deals with and accepts his new situation, and is accepted by the other Gods.  You get the feeling that the Greeks were a whole lot more accepting of bodily differences than we (the West) are today.

In summary, Herald is an enjoyable book that successfully makes sense of the Greek stories.  Not everyone will accept or agree with the version of events presented within, but as I see it that's part of the fun of reading new versions.  For someone unfamiliar with the Greek stories and looking for way in this would be a pretty good place to start.

Now, all I need is for Sea to finish her sequel and for someone to write a similar thing from the point of view of Athena.  And Artemis.  And then for people to do similar with the Norse and Celtic pantheons.  If you've got any recommendations for me, please tell me in the comments!

A note: information on downloading the book can be found here.  It reads successfully on the kindle although some formatting is lost.
Posted by Saranga at 12:00 pm

Yours is the first review of the challenge! Sounds like a perfect read for lovers of Greek mythology - or, for that matter - for lovers of a well structured novel.

The review was safely received and will appear on my blog in a few days. Thank you!

Wow, THANKS, Saranga! I'm glad you liked the book. :-) I AM working on the sequel and, pending any unforeseen disastors, hope to have it finished by the end of the year.

My pleasure Sea :) It was an enjoyable read and quite gripping in places!

I look forwatrd to reading the next one (please make it available as an e book, if at all possible!!)