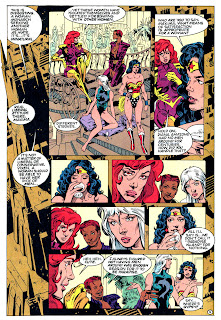 This issue, and the preceding one, is quite interesting as it’s women focused. Written by Peter David. it’s got his brand of humour. The story arc is titled Valley of the Daals, in a rip off from the Valley of the Dolls book, which I haven’t read but I gather it doesn’t have a lot in common with this comic plot.
Anyway, a couple of dudes crashland in the jungle. One gets eaten by piranha like fish the other survives the crash and the fish and finds himself in an underground civilisation, populated exclusively with green skinned half naked women warriors. They lock him up and send a message saying that he can be rescued but only by women.

J’onn J’onzz gets together a crack team consisting of Vixen, Maxima, Dolphin (yay! she’s far too underused), Gypsy, Wonder Woman. Under duress, J’onn shapeshifts into a woman, J’oan J’onzz, for the rescue mission. Somehow his boots become thigh high, his pants ride up to become a thong and he does something clever with the red straps to make an impromptu barely there bra. They get to the valley of the Daals and their leader takes a fancy to J’oan and demands that she marries her.

It’s a fun couple of issues and it’s probably meant to be a send up of the general depiction of women in comics, but Herland it ain’t. At any rate I enjoyed it enough to buy a few hardcopies from ebay. I like Peter David’s comics but since Racefail 09 I haven’t been too impressed with his politics.

Doom Patrol #34: Monsieur Mallah and the Brain admit their love for each other. The Brain is currently in Cliff’s metal body and they share a robotic/simian kiss. It’s very sweet. Then they get blown up.

The Outsiders Unknown (to me) #: I’m sure this was the series where Grace Choi and Thunder got together, so I am wondering if this is the book where they both came out? I adore Grace. Not enough to keep buying the Outsiders books, but she’s one of those characters who I love that they exist and I think has a lot going for her. And she just looks so damn cool. With her tattoos, her shortish hair, low slung trousers and general stance, she’s awesome. If she got her own book I’d buy it, but not an Outsiders monthly issue. Maybe it’s the Bat-clan connection. Mind you, now Bruce is dead maybe it would be worth picking up again. Anyone out there reading it? What do you think of it? Are there lots of Grace/Thunder scenes?
Posted by Saranga at 5:29 pm

To my memory the actual coming out of Grace and Thunder was never depicted, their relationship was well in place and known by all their teammates in the first One Year Later issue of Outsiders.

The first tentative (and very sweet) moves of their relationship was in the one and only Outsiders Annual. There were tons of scenes with them being a cute couple between OYL and the series getting chopped.

PS. Thanks for scanning that Wonder Woman scene, it settles an argument I've been having for a while where my side basically boiled down to "If you think she never did you're a idiot." and now I've got some sort of proof.